As TSB is slowly growing, more and more people join the community. Sometimes it’s nice to know and learn a bit more about the people behind the community, the people making it all possible as well as to hear from it’s members, the people that make up the community. We thought it would be nice to spotlight a member of the community every week to get to know them. This week is the thirty-seventh and it is with someone who supposedly rules at commanding (I know it’s bad, I’m sorry), it’s RulingCommander. 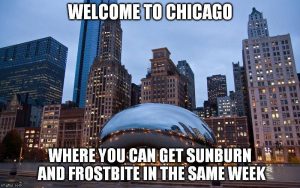 “I’m a 20-year-old student in the Chicago-land area of the USA.”

“As a T-4 within the ARMA sub-community, most of what I do pertains to helping manage and run that part of TSB. In the past, this included sorting out training curriculum (including writing the syllabus for training pilots) and helping to ensure smooth functioning within ops, but as of late I’ve mostly been acting behind the scenes through Discord to help some of the other T-4s with their projects as real life has been busy. With regards to general TSB, I gave Homebrew a base to build the new permission system off of and helped him test it.”

“Peace and quiet.
In a lot of the large hangout channels, I’ll generally sit there and only chime in once in a while when I feel it necessary. I prefer to either be playing games with a group of friends or just getting projects done while alone.”

“I’ve found that my musical tastes tend to change quite often. For a while I enjoyed classic rock, but as of recent I’ve been listening to a lot of Sabaton while I work, and I’d have to put their song Rorke’s Drift as my current favorite.”

“My all-time favorite game would have to be Europa Universalis IV. Something about combining the setting of the mid-1400s to the early 1800s with Paradox Interactive’s Grand Strategy mechanics produces, to me, a very enjoyable strategy game with a lot of replayability that has the added bonus of getting to compare the messed up world one inevitably creates to actual history. My friends and I have been playing small multiplayer games in this for over 5 years since we pivoted to it form Civilization 5, and while it might not be my most played game (ARMA III takes that cake) it is definitely my favorite.”

“I first started playing games back in 2010-2011, starting with Planetside 2 and League of Legends after being introduced to them by my friends. In fact, a lot of my interest in building computers originally came from having to build a basic PC since the really old Dell I had in my house couldn’t run Planetside 2 as it lacked a dedicated GPU.”

“I got into gaming when I moved to where I currently live and was introduced to computer gaming by my new friends. Up until then, I had just read a lot as my hobby. I ended up joining TSB a couple of years ago when my friends weren’t able to be on often due to schoolwork, and I was interested in playing ARMA III as I had it sitting in my steam library. I had stumbled across Liru’s youtube channel and decided to join TSB from there.”

“Probably my greatest moment, or at least the one I’d say I’m most known for, occurred during the finale of an ARMA op campaign back in December 2018 – the finale of Ambiguous’s Pacific Grim zombie survival campaign. I had been serving as Ground Command for almost the entire campaign, and for the finale had hatched a plan to infiltrate and steal the nearby NATO carrier, under the pretence of negotiating an alliance, to escape the island. I landed aboard the carrier with a team of 3 then high-tier players, and bought some time for a diver team to plant charges on the carrier’s escort craft by essentially having negotiations with Ambig for at least 20 minutes (towards the end, it was very painful to RP’ing that). Eventually, I asked “Have you seen the Blackfish?” referring to a gunship I had lost in the very first mission, and instantly my team shut the doors to the command tower and we neutralized everyone inside as helicopters loaded with infantry made their way to take the carrier.
Now, that op failed as my demo team, after almost an hour, had not planted the charges, so the frigates blew our helicopters out of the sky. However, just the moment of saying that sentence and kicking off such a plan was, to me, incredibly unique and memorable.” 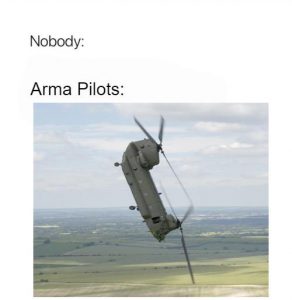 “Surprisingly, for the amount of flying I’ve done in the ARMA community, my instances of friendly fire are surprisingly low compared to a lot of the other pilots. I’d have to say, then the biggest blunder I can remember did occur in TSB.”

“I would change the part of the join message on the Teamspeak server advising new users to join the channel so that it uses a different color, as I just noticed that dark blue text is really hard to read in TS3s dark mode.”

“There’s a couple.
I really, really enjoy getting to fly CAP and actually dogfight in ops. It’s something I’ve gotten very good at and it’s one of the few things in ARMA that can actually give me a rush of adrenaline. It’s even better when it’s against another human.
Otherwise, over a year ago when the old T-3 still existed in the ARMA group, I enjoyed when we got to run ops as a small mostly cohesive unit.”

“What happened this time?” 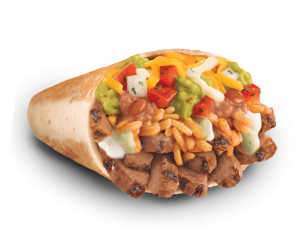 “I really appreciate a grilled steak burrito from a proper Mexican restaurant (thankfully, I have one local), but Chicago-style deep dish pizza is always good.
For a drink, I mostly drink water/orange juice, but I’ve gotten to have some great German weissbiers when I’ve visited Europe.”

“It’d be KerbalSpaceProgram, since he’s one of the people I’ve gotten to play with who seems like he’s been around forever.”

“Assuming you’ve played Kerbal Space Program, how many kerbals would you say you’ve guided to an “untimely demise?””

Now FMJamesVincent had a question from their interview: “When it comes to ARMA operations, what type(s) of ops have you enjoyed the most and why?”

“The ops I’ve most enjoyed are ones where, as the Ground Command, I have a lot of control over not just the current op, but overarching strategy. This is why my favorite campaign is still Ambiguous’s Pacific Grim (aside from the Blackfish moment), as I had the ability to do whatever objective I saw as most necessary, organize the base and logistics, and even manage relations with the other factions present. It’s not a style for everyone, and I do believe it’s not a style built for every op, but it is what I’ve enjoyed the most and what I build my ops around.”