Review – Sam and Max Save The World 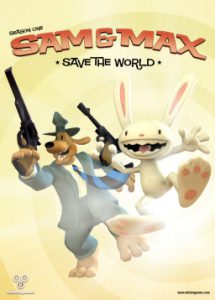 Game description: Based on Steve Purcell's comic book series Sam & Max, the game follows the title characters Sam and Max—self-styled vigilante private investigators, the former an anthropomorphic dog and the latter a "hyperkinetic rabbity thing"—through several cases involving a hypnotism conspiracy. Each episode features one case with a contained story, with an underlying plot running through the series. The game was announced by Telltale Games in 2005 following the cancellation of Sam & Max: Freelance Police by LucasArts in the preceding year; many of the employees at Telltale Games were members of the Freelance Police development team.

Sam and Max Save The World (or just Sam and Max Season One) is a point and click adventure game in the style of classic 90s point and clicks. Developed by Tell Tale games, released in 2006/07 for the PC and Xbox 360,and published by Skunkape games. Taking inspiration from classic LucasArts titles. It is an episodic game, released in 2006, Season One totalling six episodes. Gameplay is simple; it is the classic point and click type, simply point at an object, or a location, and your characters will interact, or move to that location. The main highlight of the game isn’t game play. It’s rather the humor. Sam and Max is a video game that delights in mischief. You play as Sam and Max who are freelance police officers. Yes, that’s right, Freelance Police. Sam, the canine, and Max, the manic lagomorph. You will spend most of the game collecting objects, talking to characters, shooting things, solving puzzles, and if you’re not so good at these types of games, consulting a guide. But not to worry, as this game was released in 2006, there are multiple complete guides, in many different languages!

Now that the synopsis is out of the way, we can discuss more important issues, like UI. Does the UI look good? Yes. It is out of the way, and it functions. The main menu is rather plain, it’s usually a piece of artwork, with the standard, New Game, Load, Extras, and Quit arrangement. The game features an autosave that makes a snappy little sound each time it goes off to let the player know the game is saving. It is able to save without interruption. Manual saving is still possible. Save locations are at each location, I have not noticed them spaced out apart enough for them to be annoying enough to bother me, but perhaps, they may bother those who would rather start from a location they were at say, 2 minutes ago, then the one they entered 5 seconds ago. That’s right, this is a game that saves very often. You can always save and quit as far as I’ve noticed, except during cutscenes, which are sort of the main charm of the game anyways. The story is episodic, but it all loops back into one thread, and while I would prefer to avoid spoilers,the story is about a strange hypnosis conspiracy, which later as the game’s name implies has you, saving the world. The mood of the story is consistently lighthearted, this is a comedy not some dark deep dive into some man’s twisted psych. (Or perhaps it is?). The story is good and it indeed does immerse one in it as much as a story about a Dog and Rabbit detective team could. You play as both Sam and Max at the same time, and at different times, you will be prompted to pick dialog choices for either.

Side characters are fun, and they only compliment the game. While this isn’t a type of game where you get to know them more per say, that isn’t really necessary. This isn’t like TellTale’s other games, choices have no effect on later events, there is one solution, just like a classic point and click game, and that’s the way to do it. However, exploring the game can be rewarding, dialog can be funny, and so can character comments. There are plenty of cutscenes, and dialog, all of which can be skipped with a right click. There are no mods of any kind, this is a simple game. Made to be enjoyed as is.
The Soundtrack is completely original, with several jazzy tunes composed for the in game locations, as well as unique ending themes for each episode. I would say the soundtrack is in fact excellent, and sound design is on point. While the visuals have certainly aged, they still hold up pretty alright. The game is completely finished, and I’ve encountered no bugs, just esoteric puzzles, considering the age of this game, this is completely clear to play. As a point and click game, this fit’s into the genre very well, seamlessly even, and I’d totally recommend it for someone wanting something different from all the strategy, FPS, or simulators you may have been playing. If you like adventure games, or are a fan of the point and click genre, I’d recommend, now onto the final score.

State of the Game

Considering the age of the game, it’d be a complete farce if this was buggy, and it’d be a slap in the face of all of you, if I were to sit here recommending it to you. It’s not. It is completely playable, and it is indeed complete. Although, I don’t think I should have to give a score for a game being complete, but maybe one day, that’ll have to change.