Exceptions to the age restriction; Yes or No?

I received a rather interesting question by mail today, and without revealing any name, I do wish to address this issue in a general manner. I’ve been asked this question a few times before, and every time I have to explain the “why”. I do not mind to explain it, but I think it is time to publish an in-depth reasoning so it will be understood and can be referenced in the future.

“I thoroughly enjoy ArmA 3 and I was looking to find a larger group to play with but I unfortunately have seen that the community seems a little unwelcoming to members under the age of 18. I made my account and verified prior to the age limit being raised from 16 to 18, so that isn’t an issue, but I do want to plead my case before even applying to the ArmA unit. I’m a rather mature guy and people often just assume I’m 18…

But there is a rare 12 year old, I guess, every now and again. Since this has been a lot longer than I intended, here’s my question- can an exception be made if I have a YouTube channel on which I’m able to prove I’m mature enough to be with TSB? ”

Our age restriction is in place not to deter people but to make sure that they have the LEGAL (I put that in capital letters as that is very important) age of consent to make a binding agreement with regards to our “Terms of service” or as we call it our “Code of Conduct” and other applicable agreements therein. This means that people becoming a “member” are not only of legal age, but understand the concept of a “legal agreement” and the consequences of their actions.

As you have stated, minors are “frowned” upon, not merely because of their behavior (but that is one of the concerns), but also because they usually can not yet conceptualize certain important concepts such as “Teamwork” and “Hierarchy”. They may have heard the words, but they do not grasp the meaning, they usually do not have the life experience to understand what it means. This is where we come down to their level of maturity. Sure we could “test” them to see if they are mature enough or not, but this concept is called “discrimination based on age” and is frowned upon. It would be the same as if they use a machine to determine how “colored” someone is to either allow them on the bus or not. You may see this as different, but LEGALLY there is no difference. 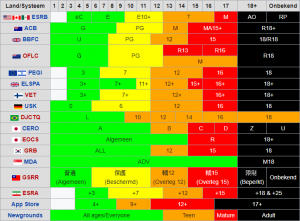 Another reason to not allow minors is based on LAW (Yes, again, legality is the core to this). As we target an audience of “mature’ gamers that play games that are rated “18+” or “M(ature)” by either the ESRB, PEGI or any other Game classification, we also have to apply those ratings to protect those who are not old enough to play the games. That is why even though 16 year old “recruits” could join TSB, they were not allowed to play “18+” rated games. Not to mention the discrepancies (see the image) between those rating organizations; a game could be rated as “T(een)” by one organization, which means 12 years and older, and “18+” by another based on their criteria. So it became hell to track who is/was from which country and who could play what game based on the rating of the classification based in their country.

We had to draw a line. We are based (legally) in Europe (Netherlands), so the laws we have to adhere to are the European (Dutch) laws which state that there can be no legal contract if one of the parties is a minor (under 18). If there are people under 18, they need to be EXTRA protected online with special safety mechanisms that, for example, censor the chat, the forums, etc. etc. TL;DR: An administrative nightmare.

Now you ask me why we do not make exceptions to these rules, well that is quite simple: If we make one exception, we have to make more, and more and more…. And then we also have to change the way TSB works, in short, if we’d open the sluice gates we’re up and over our ears in legal issues, censorship and a heap of legal documents I would have to submit. And with all due respect: Unless I can find someone to do all that, and be there 24/7/365 and monitor everything… It’s not going to happen.

I know we used to allow them in the past, but that was before the new online privacy laws… And they have been a pain to deal with in their own right…

Unfortunately not; If we allow one, we have to allow all the others as well. This has too many implications as stated above.