As TSB is slowly growing, more and more people join the community. Sometimes it’s nice to know and learn a bit more about the people behind the community, the people making it all possible as well as to hear from it’s members, the people that make up the community. We thought it would be nice to spotlight a member of the community every week to get to know them. This week is twelfth in the series with a speechless infantryman who struggles to live as T-1, denseacat. 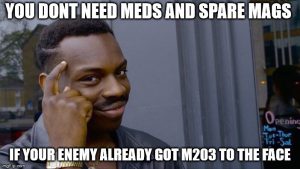 “I’m that “never voice talking much” player, who loves to bug Nordern from time to time.

Lately I mostly take highly underestimated grenadier role and delivering TONS OF DAMAGE with my small underbarrel packages, because it’s not about the size, it’s about the skill. So, if you hear rapidly repeating THUMP!THUMP!THUMP! on battlefield, it’s probably me going nuts on something hostile.

Also, for those who asking “How do you carry so much ammo for your underbarrel? Doesn’t your mags and meds take space in backpack??” I point towards this —->”

“Good food, good alcohol with fubar ops on top of it at evening of last working day I guess? Also a well-placed underbarrel GL shot.”

“I think it will be Daft Punk’s “Harder Better Faster Stronger”. I got obsessed with this French electronic duo since 2003-2004.

“According to my Steam logs its Arma 3 with 1338 hrs played. Currently I’m diving into Battlefield series again, that WW1 stuff was good at beta and went even better with release. And I’m a big fan of bf series itself. Man, those infinite sand dunes at El Alamein in 1942 around you when you accidentally jumped out of your plane and landed in a middle of nowhere…good walking times. (Plays Battlefield1942_theme.mp3)

Also, I like Half-Life series. Multiple completions on all official parts and more. Except Decay. I’m not playing shooter on console, that is silly.
Does anyone even know of Half-Life: Decay nowadays??”

“I’ve started playing 20 years ago. Wow I’m feelin’ old now. Seen rise and fall of THQ. Been in TSB for almost a year.” 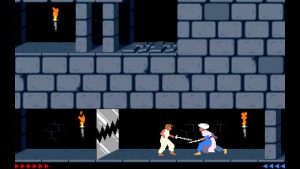 “First game I remember played was probably Prince of Persia 1989 on MSDos. Or Dangerous Dave in a haunted mansion.

I like shooters, space simulators like Freelancer, Elite Dangerous and a bit of roguelike. TBoI/FTL for example. Know any good sci-fi game with pew-pew, random generation and space in it? Msg me up!

(Also, anyone remember those mystery TURBO buttons and locks on their PCs?)

(And argue over anything in Discord ofcourse)
Also, for good Arma operations, but who the hell don’t do that in Arma dedicated community?
People need drama, memes, fanboys to mock and bug with @ in discord”

“Greatest gaming achievement. Don’t think I have that, lol. I’m just playing games, enjoying story and stuff.
Well, I leveled up my Battlefield Bad Company 2 account to max level at some point. Doesn’t that count?

And in TSB, it’s when Nordern selected me for interview (Look ma, I’m on the TV, I’m a local superstar nao). jk.

It was not long ago, on Bartielord’s spec-ops. Long story short. 1 squad, Laarry, Mocksy, me, Maniac, as far as I can remember. Task is recon, find quad-bikes, eliminate guards and retrieve quads to base. Everything was perfect until we started to drive back and discovered that tree branches and leaves made of adamantium or some shit. We were hitting invisible hit-boxes of leaves and damaging METAL quad-bikes if driving by too close. Bohemia pls.”

“That moment when a lot of people changed their schedule because of IRL stuff. I can’t play Excelarion/Bartie’s spec-ops/Fubarops now because I’m living kind of in future. Time zones are too frustrating. And some Storytime:

Some time ago there was an op, we were playing as vipers, assaulting few compounds at coast in the night. There was intense firefight, mags went empty, launchers was empty, aaaaand strider rolled out in front of us. I looked behind me, yelled “STAND CLEAR”, and realized my launcher was empty. Reloaded it and shot immediately, back blasting Excelarion and Nordern, then got 50cal in the face. They left me unconscious to embrace death from bleeding. I deserved it and learnt to look behind every time I want to shoot rocket hard way. Here’s result of that accident. At least sempai noticed my existence!”

“Decrease amount of text channels in discord. Currently channel list is full of mess.
Also, some kind of automatic modset updates would be pretty good improvement, solving a lot of problems I think.”

“Every good game session in TSB with alcohol and fun. Getting poisoned with morphine by Excel on Kobbvatn. I told that somebody was moving around in darkness, I said it a few times!

Also, this: As you see Kaiman falling right in your face, standing on the roof… “I really hope nobody was in that tower“” 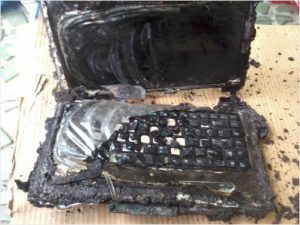 “Playing on my laptop, HP Omen (which is shitty in quality terms, don’t buy HP stuff, speaking as owner of 3 high-end business class HP laptops and a HD display),

Remember – always use cooling pad when gaming on laptops and clear insides from dust and other pieces regularly! Or prepare for unforeseen consequences.” 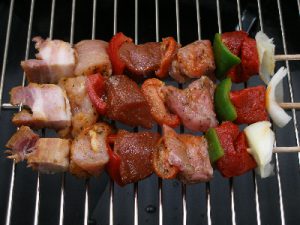 Shashlyk I think. Asian thing, basically, its meat, grilled on smoldering ember. Sheep meat, cow meat, pork, whatever if its cooked right.
My fav drink according to statistics is tap water. Staying hydrated is important thing when you live in warm climate region, so stay hydrated, kids 😀

Actually, it was beer. But with time passed by, I started to drink less of it. Once I tasted very soft wheat beer from Germany, and it was diamonds. No local shit beer can match that taste, so now I’m drinking only to get slightly drunk – cola + whiskey, vodka, cognac.”

“Mocksybren, because I want to know what hides behind that famous universal answer “Mhm””

“How much things you didn’t finish lately because you got overwhelmed with their rising amount?”

Now Nordern had a question from his interview: “Why won’t you stop calling me!?”

“Because your voice sounds very funny to me, and I very like your “British” accent, though it’s sometimes hard to understand, you with all your mumbling”