As TSB is slowly growing, more and more people join the community. Sometimes it’s nice to know and learn a bit more about the people behind the community, the people making it all possible as well as to hear from it’s members, the people that make up the community. We thought it would be nice to spotlight a member of the community every week to get to know them. This week is tenth in the series with a military man called bLLLLman. 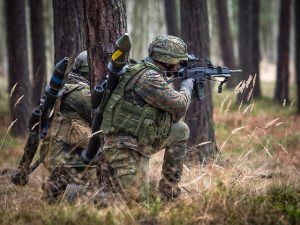 “I’m a 26 year old German, living in Bavaria. Currently serving in the German military as a Panzergrenadier.”

“I’m a former T5 now the newest JCS in TSB. I’m hosting an Arma3 Operation every Friday before Liru’s public op.
As a JCS I’m trying to get new people to join our community and the next big step in this will be getting our own Post Scriptum server.”

“Currently my #1 song would be “Elektronomia – Imagination” , but there is a wide variety of songs/genres I listen to.
From classic to synth-wave there’s a lot of options, the only exception to this would be German rap… that just sounds awful.”

“Hard to decide, it would either be the Counter-strike series, because that’s what I properly started gaming with or the Souls-borne series just because I haven’t enjoyed a game as much as any of the Souls-borne games.
As with music I don’t really have a favorite game or genre but play whatever I feel like playing, MOBA’s, (MMO)RPG’s, FPS, there’s a lot of games I’m willing to try and learn.”

“I would say since 1998 when HL 1 released, I somehow got my hands on it and was able to play it on our shitty PC in the basement 😀 Later on I would play Counter-strike 1.5 with friends on LAN and over hamachi.
I’ve been in TSB ever since Liru decided to move over from VG.”

“I was always fascinated by the possibilities and challenges gaming would offer and I wanted to see how far it would come. And well nowadays the options for games a fairly limitless.
Originally I joined VG to play in their Arma3 missions, but made the move over with Liru instead of sticking with VG.”

“Well lets split this into two parts:
For Solo achievement I would say beating the last Boss of the second DLC of Dark Souls 3, Slave Knight Gael. That fight was just awesome!
The music, the setting and in general just the intensity of the fight and seeing that boss for the first time was amazing. I truly thought I would spend dozens of tries trying to kill him but I managed to get lucky on the sixth try, I surely will not forget that fight.

As for moments in TSB, I would say most missions I played with Sniperwolf52, there’s just so many moments where the two of us did something crazy or stupid stuff.
What comes to mind first is an Op from the very beginning where the two of us extracted a Blackbox, that a whole squad couldn’t ( I think Liru made a clip of it) + that amazing looking Blackhawk extract at the end.

But yeah there’s always something funny or amazing when I play with Sniperwolf.”

“Surely Dark Souls gravity comes to mind >:(
In TSB you can pick any T3 Op I’ve played/commanded, either it goes really well or really bad. Kind of a 50/50 chance with those Ops.”

“Seeing as I am the newest JCS in TSB, I honestly wouldn’t change anything at the moment.
I feel like everything is working out just right.”

“What a bunch of (insert situational fitting word)!”

“Well I enjoy all sorts of Italian style or Italian food seeing as that’s what I’ve been raised with.
For drinks its gonna be old fashioned water and a beer every now and then.”

“When is the bLLLLman Antics special releasing? :D”

Now Teacher had a question from his interview: “How did you meet Sniperwolf and was it love at first sight?”

“First time I met Sniper was back in VG in one of Lirus first PVPvE Ops. We were both active military at the time, so the shit we had to deal with every day kind of connected us I guess”